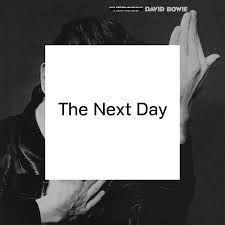 It’s good to hear that one of my ‘old’ heroes, David Bowie, is back with a brand new album. Due to his health issues in the past decade, I presumed such an album was not possible anymore, but after 10 years of silence Bowie surprised us again. I had the album quite often on repeat in recent days due to a minor flu and cold, so here is a little review about what ‘The Next Day‘ is about.

The pre-released single ‘Where Are We Now‘  gave perhaps a somewhat wrong impression about what to expect from the album. A breakable voice and a lush atmosphere might give the impression that we were in for an album full of nostalgic look backs, but ‘Where Are We Now’ is one of the few ballads on the album. The next wrong impression that one might have is by judging the album cover, the 1977 Heroes cover superimposed by a crude and simple white rectangle with the album title. Although ‘The Next Day‘ carries lots of references to his rich repertoire, the album is certainly not a ‘Heroes Part II‘. Most of the songs from ‘The Next Day’ are in the rock idiom and Bowie still has a powerful voice that can carry the songs.

Overall the album has quite a darkish atmosphere and the instrumentation is quite conventional throughout the album. With Tony Visconti behind the desk, there are hardly any inventive or experimental sounds going on, like you can find on -for example- ‘Scary Monsters‘.  The style of the songs is similar to the works Bowie produced in the late 70s/ early 80s.

Overall the quality of the songs is high and musically interesting. My favorites are ‘The Stars Are Out Tonight‘, which has a very subtle mixed lead vocal, while the solo guitar is much louder, creating an interesting effect. ‘Love Is Lost‘ is is for me the best track, powerful vocals, with a slight touch of insanity that only Bowie can produce. ‘I’d Rather Be High‘ with its psychedelic influences, is the most interesting song when it comes to song structure and harmonies. But as indicated the album is very coherent, you won’t need to skip filler tracks.

Update: after some more relistens, the track ‘How Does the Grass Grow‘ has grown on me and has become my favorite track. It starts with staccato singing and then cumulates in a refrain, where the main theme from ‘Apache‘ (yes indeed, the Shadows song) is being sung. But then comes the most beautiful part of the song, a Procol Harum AD 1967 like psychedelic interlude before the guitars take over and the song gradually fades.