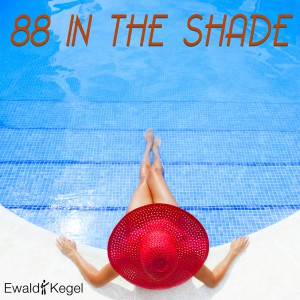 ‘88 in the Shade‘ is the reconstruction of an imaginary album that might have been released in 1988, the year in which all of the songs on the album were recorded. After so many years it is difficult to analyse why none of these songs saw the light of day as they were recorded or earlier in time. But fact is, none of these songs, except for the short instrumental “Drive” were ever released before. “Drive” was included on the 2004 compilation album “Almost Lost“.

So now, almost 3 decades later and after a process of carefully digitzing, mixing and mastering  “88 In The Shade” was recreated, a full length album with songs the world did not hear before.

Looking back it is to be noticed that after the recordings for the “2” album in the second half of 1987 there were a dazzling amount of ideas floating around, contributing to a strange and broad range in styles, moods and variety of the songs on this album. In some ways maybe even reminiscent  of the Beatles’ “White Album”  that was released 20 years earlier. “88 In The Shade” only represents a small segment of the recorded material during that period. Ewald’s attention and focus of composing and recording music had already turned to instrumental music for audiovisual productions. The ‘regular’ songs became less important, maybe contributing to the fact that none of these songs were released before.

The album opens with “As Years pass By” an introspective, dreamy song with semi-intellectual lyrics before the listener is abruptly pushed into  a completely different atmosphere, a raunchy rock ’n roll song with the introduction of the “Johnny Struggle” character, someone operating on the self side of society and according to the vocalist in dire need of a relationship.
Then after the rather abrupt ending, there is another mood with the very Lennon-esque track, “Dandelion” fading into sound effects before the funky “Kiss Me” starts, with some of Ewald’s most explicit lyrics.
“Drive” is a short instrumental with a plethora of styles and mood swings.
“Stay” is beautifully melodic and pleasing, another songs with Beatlesque influences, while the following track “Irene” is certainly one of the album’s highlights and delights, with its historical setting telling the story of a local witch hunting crowd obstructing the relationship between a man and woman.
Another song clearly inspired by British 60s and 70s pop is “Of All The Things”. The next song introduces yet another style, reggae, with the track “In My Place”. The relaxed mood and low timbre vocals result in a pleasant effect.
“In My Place” is followed by one of the few tracks that clearly show contemporary 1988 influences: “Bizarre”. The hard and prominent beat might give the listener in the mid 2010’s a somewhat uneasy feel, yet the sampled and a heavy electronic drum sound give the song its defining edge and the melodic character is still there.
After ‘Bizarre’ the listener is lured into the album’s final, the 9 minutes running epic piece: “A Miracle”, closing the album. The song starts out as a catchy pop tune dealing with the “mystery of life” passing all kind of different styles until the songs ends in a long fade out where the music gradually disappear into nature, symbolising life and nature are indispensably connected: old life fades into nature to make way for new life.

Compared to its predecessor “2” this album contains a lot of technical novelties. Except for “A Miracle’  all tracks were still recorded onto 4 tracks, but ‘bouncing’ had practically disappeared as a broad range of musical instruments allowed for the music to directly be recorded to a stereo track tape and the other tracks on tape could be used for vocals, sound effects and guitar. Originally the tracks wete recorded to a Tascam 246 recorder. The exception being “A Miracle” that was recorded to 8 tracks (using the Tascam 238). The instruments on this recording were: Yamaha DX7, TX7, TX802, Roland MKS-100 and the Alesis HR-16 that had replaced the Roland TR-707.

Listen to the album on Spotify.

or buy the album on iTunes.