I learned to know the music from Mac DeMarco around the time his second album ‘2’ was released. It sounded low-fi mainly because he was using an old Tascam 8-track recorder with lots of wow and flutter. Nevertheless the effect of Mac playing all instruments by himself combined with the catchy melodies and low-fi sound resulted in a pleasant listening experience with songs like ‘Ode to Viceroy‘ and ‘My Kind of Woman‘. Mac could effortlessly continue this pleasant mix on his next album with his unmistakably best known song ‘Chamber of Reflection‘.

All of these songs were of course present in the playlist of his concert in Utrecht. Before Mac would hit the stage there was the supporting act Montero that painted nice psychedelic landscapes with Beatlesque song structures. 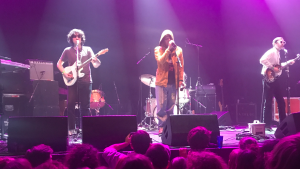 So at 9 PM it was time for Mac deMarco. It was the first time for me to see him play live and from what I had read things could become quite outrageous at his concerts. None of this happened in Utrecht, besides his somewhat distorted and clumsy way of movements and some beer drinking everything remained normal. He excused for having lost his voice for ‘hanging out too late’ and asked the crowd to sing the vocals on ‘My Kind of Woman’. It took some time before the public really connected with what was going on stage but when ‘Freaking Out the Neighbourhood’ was started the atmosphere changed and the first stage climbers and crowd surfers were noticed.

The set of regular songs was not too long and contained a nice anthology from all of his albums. One of the highlights for me was ‘My Old Man’ that got some minimalistic and jazzy treatment.  Because most of Mac’s songs are quite laid back (and the trend is getting more and more noticeable with each new album) the public had to wait until the ‘official’ playlist was done before the adequate band set in with a set of their favourite songs. This set covered more heavy and up tempo songs like ‘Don’t Fear The Reaper’, ‘Californication’, ‘Run With the Devil’. Mac often took place behind the drum set letting his drummer take care of the vocal duties.

A new album is released: Piano & Guitar, Vol. I.

Where the previously released album (2meetu) in July 2016 had a distinctive electronic sound, the P&G album contains a more pop rock oriented direction. As the title indicates, the guitar and piano are omnipresent and the arrangement of the songs is build around the acoustic piano and acoustic and electric guitars.

The P&G album became like a time travel through Ewald’s favourite music styles and influences from the past and present.Each of the tracks on the album can be linked to these influences. The album opener ‘Early in the Morning’ sounds like a recording session for Paul McCartney’s 1971 album Ram, while another track ‘Down on the Ground’ breathes a production style from the Beatles AD 1969, when they recorded their swing song album Abbey Road. But the influences certainly do not stop there. Varying from Beach Boys (‘It Doesn’t Take a Scientist’) to a string of jazz and latin influenced tracks (‘When’, ‘That Initial Moment’, ‘Young & Beautiful Lovers’). ‘When’ is actually the finishing of a demo that Ewald already recorded in 1984 and in its chord progression and structure references to the music of Antonio Carlos Jobim. The other tracks on the album were mainly recorded in the summer and autumn of 2016, with the exception of ‘October’ and ‘That Initial Moment’ that were both recorded earlier (in 2013).

‘Lady Blue’ is a multi layered instrumental track that hits off with Asian inspired percussion theme, gradually transforming into a soundtrack like theme (think the music of Ennio Morricone) and then to morph into a mysterious, psychedelic last episode. ‘Mam’ is like a playful, simple interlude, an introduction to what can be considered the center piece of the album, the epic ‘Ride Along The Stars’. After the vocal first part, the track is for the second half instrumental offering the listener a multitude of different instrumental themes before the fading containing a double, improvised solo guitar. The sparse use of Mellotron in the song contributes to its mysterious and psychedelic qualities. As a counter weight to ‘Ride Along the Stars’ the album’s final track is a simple and elegant ballad. ‘Believe in Me’ contains the bare basics of piano, vocal and some sparse cello.