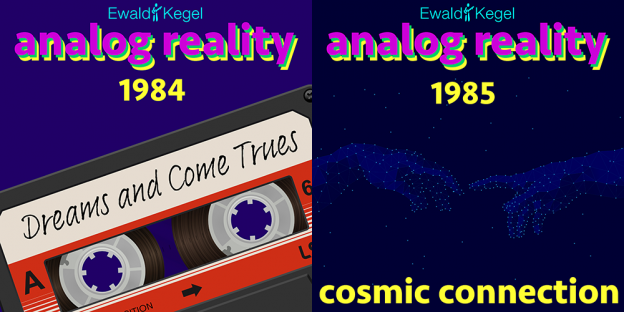 “Sometimes I -and I guess most musicians- are haunted by a dream where one discovers a tape with songs, forgotten but still small treasures in their own right. If anything, this collection of songs is my ‘analog reality’ of that dream.”

Forty-six songs from 1984 and 1985 have been released on two separate releases: Analog Reality 1984: Dreams and Come Trues and Analog Reality 1985: Cosmic Connection. Originally kept away from release due to incompletion of the recordings, mistakes or other quirks these songs were given a second chance with extended help of modern audio software. This software enabled the original songs to be re-edited and remixed with great detail. Other software was used to reprocess and enhance the sound sonically, filling in missing frequencies and harmonics.

The 1984 album takes the listener back to a time when the 4 track cassette recorder was introduced, the Fostex X-15. Any Way You Want Me To was the very first recording with that recorder, mid 1984. Then follows a sequence of songs with some plans to release (from (No More) Low Down Blues to A Dream Girl’s Call). Body2body is remarkable for it comes close to the later so popular live DJ-ing: live adjustments of drums and sequenced synth sounds on the fly.

Then there is a selection of songs sorted from old to new, where Summer Child II clearly shows the progression and the ambition to create more complex compositions compared to the simpler and an earlier song like Truly We Do.

All the songs were recorded with relatively minimal equipment consisting of a Roland JX-3P synthesizer, Roland TR-606 drum computer, an electric guitar (Gibson RD Custom) that also was used as a bass guitar in several tracks. In order to create a reverb effect instruments were often fed into a Fender Vibrolux amplifier. From the track Song for Jerry  onwards a Boss digital delay was introduced adding new sonic perspectives to the songs on the album.

The 1985 album shows an expanding ambition to create more complex compositions, instrumentations and arrangements. On Sun Lover we hear the Roland TR-707 rhythm composer for the first time and in other songs the introduction of the Simmons drum can be noticed (like on Big Boy), enriching the drum and percussion sounds. Mid 1985 saw the introduction of FM synthesis with the Yamaha DX-7. This would lead to a rather dramatic shift in the sound of the music, most notably in The Woman I Love. FM synthesis would dominate Ewald’s music for many years to come. The role of the guitar would become more and more subordinate to the use of synthesised sounds.

This Is Love is without doubt the most ambitious (some might say too over ambitious) music production until that point in time. It features the Yamaha QX-7 sequencer as well as myriad of themes and tunes within one song. The final song Dancin’ With You (2015 Remix) is a spectacular ending of the album introducing new 21st century elements to this energetic early 1985 track, with its sequenced JX-3P bass line.