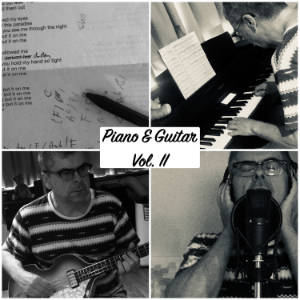 The focus of the songs on both albums is the intertwining of the piano and guitar as main instruments, resulting in a set of songs with strong reminiscence to 1960’s Brit pop from the likes of Beatles, Wings and Nick Drake. The recording of the album started in early May 2018 and the final recordings and mixes were conducted in mid June 2018. The album was mastered by Sterling Sound’s Randy Merrill.

Some songs were specifically written for the album, like the 3 instrumental Piano & Guitar Theme tracks and How Many Days?.  Other songs are older compositions going back as early as 1981 (Tell Her), Don’t Let Me Wait Too Long (1982), The Only One, Play For Today (1983), She Is My World (1987). Put It On Me (2005) and Catch You If You Fall (2014). Center of the Universe was recorded in 2013 and some additional piano edits  were made during the May-June 2018 recordings. Don’t Let Me Wait Too Long was recorded in early 2018 and finished during the May-June 2018 recording sessions.

Listen to the album on Spotify: